Give your brain the night off

Give your brain the night off 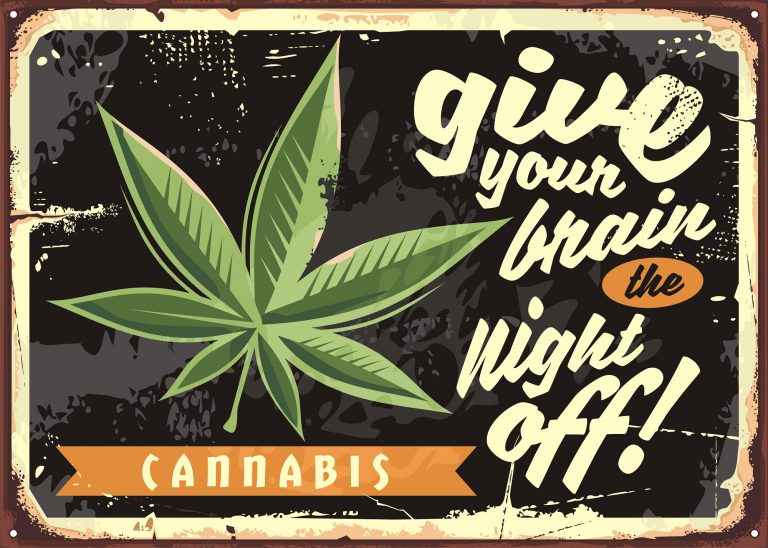 It is a misnomer to suggest that ALL marijuana strains provide the relaxation and couch-lock necessary to drift off into a blissful night’s sleep. First and foremost, sativa dominant marijuana strains provide you with an uplifting high that spikes your energy levels and makes you more creative. Indica strains, on the other hand, are the traditional weapon of choice for relaxation because the strong body high takes hold and urges you to calm down and chill out!

However, choosing the best marijuana strain to get you relaxed isn’t as simple as indica vs. sativa. A strain’s THC to CBD ratio is also extremely important. As you should know, THC is the psychoactive compound in cannabis, and while it is usually relaxing, an excessively high level could potentially give you the worst of both worlds: causing your mind to race uncontrollably while being unable to move from the sofa.

What you really need is a strain that has plenty of THC, but also a reasonable amount of CBD. CBD is a non-psychoactive compound that’s capable of counteracting the effects of THC, which allows you to benefit from a feeling of calm while also having the energy to get things done if need be.

Without further ado, let’s check out 5 of the best marijuana strains when you need to get relaxed!

Think of Orange Tangie as a variation on a theme. It’s basically a reworking of Tangerine Dream, but with different genetics. Orange Tangie has a strong, sweet flavour reminiscent of tangerines and other citrus fruits.  Orange Tangie has an uplifting cerebral high with enhanced creativity and euphoria, plus a focused boost of happiness. It’s good for treating several disorders, though specifics are hard to come by nausea, anxiety, lack of appetite, and depression. The only widely reported problems are bloodshot eyes and dry mouth, so this may be a good choice for patients sensitive to side effects.

Strawberry Snow Cone is infamous for its super sweet flavour that is remarkably like a super fruity strawberry snow cone! The aroma follows the same profile, although with a light sour herbal pungency to it as the nugs are burned. The Strawberry Snow Cone high is just as eye-opening as the flavour, with long-lasting effects that will leave you lifted and giddy for hours and hours on end. You’ll feel an influx of euphoria at the onset of the high that fills you with a sense of outgoing energy and motivation that is perfect for tackling any social situations you may have at hand. This energy lasts for hours, lending itself well to long days where you need a little extra oomph to get up and keep going.

A Kootenay Golds production cultivated without pesticides, herbicides and fungicides. Grown by B.C’s finest veteran growers who have been perfecting their craft for over 20 years.

A prevalent strain, Girl Scout Cookies a.k.a GSC, grew too large to stay within the perimeters of California. It’s sweet, earthy aroma is undeniably sensational.  Throttling you into a cerebral hyperspace this Hybrid ensures full-body relaxation and euphoria. GSC’s smell is much like the taste, a fresh batch of baked kush cookies and flavour just the same, but with a tart, minty twist.  A well-balanced high, this slight Indica-dominant Hybrid is well rounded. Hitting both the mind and body with numbing effects that relieve chronic pain and depression, giving you a cerebral lift boosting your mood ultimately leaving you completely relaxed. Girl Scout Cookies has beautiful, olive green popcorn-shaped nugs with purple undertones, bright orange hairs and a thick coat of tiny white crystal trichomes.

Sage-N-Sour, a Sativa dominant hybrid that gets its name from its flavour profile and aroma. With hints of Sage and Lemon, these sweet nugs will leave feeling happy, energetic and euphoric, a nice daytime strain that won’t leave you idle on the couch, enjoy at leisure.

G.O.D Bud, (Grown.On.Denman)  has a herbal, musky taste and a tropical, earthy smell, this strain is a favourite among all levels of smokers. This resin-coated bud features flaming orange hairs and abundant white crystal trichomes and is truly a god among buds. God Bud is a widely popular and loved cannabis that’s known for giving the user an intense feeling of uplifting and euphoria, creative energy, and an overwhelming sense of laziness, without overwhelming side effects. Patients often describe God Bud’s high as being taken to heaven and back. This strain is an indica dominant hybrid crossbreed of the insanely dank Hawaii x Purple Skunk strains. This bud was created by breeders at the infamous BC Bud Depot Seed farm and boasts a moderate 15-20% THC level. God Bud is widely used as a treatment for chronic pain, stress, and anxiety, and it’s also prescribed as a treatment for severe depression in higher doses. Because of its indica dominance, it is suggested that you don’t smoke it late at night or if you have a sleep disorder, such as insomnia, as it tends to keep you awake for long hours even after its other effects have faded.