Trainwreck is a legendary Northern California Sativa-dominant hybrid that is a blend of Mexican and Thai Sativa and Afghani Indica. It has potent and powerful Sativa and Indica effects that hit you like a runaway train, impacting you with warm pleasant painkilling pulsations. Trainwreck has a spicy-sweet citrus smell and taste, and is known to create a very intense cerebral high with benefits that are both mind, mood, and body-enhancing.

Trainwreck is rumored to have been created by two stoner brothers from Nothern California back in the stoned-aged days of the late 1970s. As the tall tale is told, the two guerrilla growers had to pull their crop early because there was a train wreck that occurred close to their grow site and they didn’t want to get caught by nosey cops and other curious caseworkers and onlookers, hence the name – Trainwreck.

Before the unfortunate mass transportation accident occurred, the two pot connoisseur brothers decided to combine the legendary landrace strains of Thai and Mexican Sativa with Afghani Indica into one potent blend that is still wrecking joints and bongs to this day. We have to remember this was the dark ages of the 1970s when decriminalization and legalization of Cannabis were pipedreams. If you could get your lungs around some Thai and Mexican Sativa and Afghani Indica then you were truly smoking on the finest.

Trainwreck is a Sativa-dominant hybrid that still retains most of its Indica effects producing a euphoric full-body painkilling sensation. With its Indica attributes on full display, Trainwreck still provides a mostly Sativa high. Medical marijuana patients can use Trainwreck to help with ADHD, PTSD, and other stress-related issues. Trainwreck also has powerful painkilling properties and patients swear by its ability to alleviate chronic joint pains such as arthritis, cure migraines, and alleviate muscle fatigue.

The typical effects are euphoric, happy, uplifted, relaxed, and creative, and Trainwreck helps with stress, anxiety, pain, depression, and insomnia. Side effects may include dry mouth, dry eyes, dizziness, paranoia, and anxiety. But be warned. This is a big boy strain. Most users will only need a few hits of the joint or bong to feel the full Sativa and Indica effects setting in resulting in both increased cerebral activity and decreased physical activity i.e. couchlock. If you want to chill hard and think deeply, this is the strain for you.

Be the first to review “Trainwreck” Cancel reply 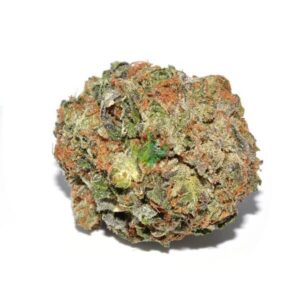 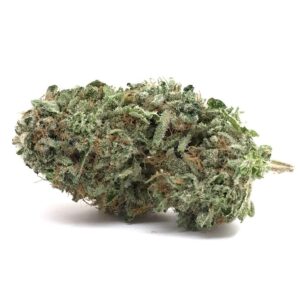 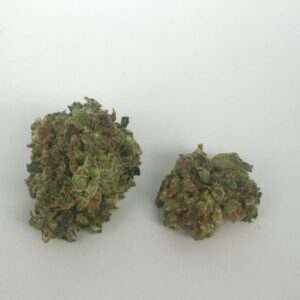 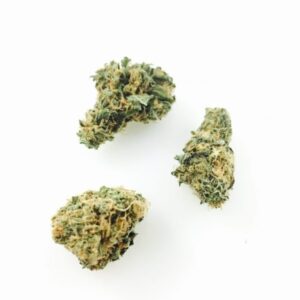